The son of a colonel in the imperial Russian Army, Alexei Jawlensky was 18 and a cadet when a visit to the All-Russian Exhibition of Industry and Art in Moscow in 1882 changed his life by introducing him to painting. Eventually he moved to Munich with Marianne von Werefkin, another artistic expat from the nobility, vacationed with Kandinsky, bought a van Gogh and studied Buddhism, yoga and theosophy.

He was never quite an artist of the first rank. But the galloping retrospective of his dogged, wide-ranging trek through the colors and styles of his time showing at the Neue Galerie has the poignant appeal of a war diary. The show, generously curated by Vivian Endicott Barnett and imaginatively designed by Peter Kimpe, offers a view of historical cataclysm — in this case, the emergence of abstraction — that’s all the more illuminating for its limited, personal horizons.

Jawlensky’s precocious impatience with the strictures of representation was the only real constant in his early portraits and landscapes. “Helene at the Age of Fifteen,” painted in 1900, when he was in his mid-30s, shows von Werefkin’s maid — with whom he fathered a child and whom he later married — as a self-possessed young woman against a background of dim shadow. Apart from her vivid eyes, though, she looks like a watery ghost, as if a body were merely ground to be campaigned through on the way to the soul. “Self-Portrait With Top Hat” (1904) is a swirl of lime-green dashes borrowed from van Gogh from which Jawlensky peers out as if in an absinthe vision. In “Dark Blue Turban,” which shows Helene in her 20s in a rose-red dress, Jawlensky tries out a striking bluish-black outline, but here, too, a kind of military tunnel vision leaves him careless of his details, skipping over Helene’s breastbone and fudging the line of her forearm in his hurry to get to her gaze.

In “Andreas’ Garden — Carantec,” on the other hand, the same impulse to get straight to the point produces a more exciting result. Here a pinkish-orange pathway, rendered as a pool of overlapping strokes, lifts up from the ground just enough to look like an abstract shape without quite losing its numinous connection to the natural world. 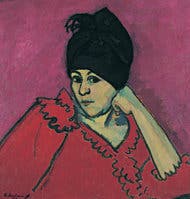 “Murnau Village,” a view of the Bavarian town he visited in 1908 with von Werefkin and Kandinsky, shows a beautiful line of red and brown roofs floating between a low blue mountain and a tide of yellow-green grass. The buoyant quality of the drawing perfectly evokes the dewy exhilaration of a bright summer morning. And “Murnau,” a depiction of the same Bavarian village painted two years later, is a small masterpiece in which the same sea-blue mountain looming over a few trembling rooftops becomes a great Jungian shadow barreling over the horizon like a storm.

When World War I broke out, Jawlensky had to leave Germany in a hurry, and he ended up with von Werefkin and Helene in a small house on Lake Geneva where, as he later described it, he didn’t have a room of his own, “only a window.” But out that window he found the view, of another simple garden path with an evergreen on the left, that developed into his most important innovation.

Building on a piece he called “Variation: The Mother of All Variations,” in which he sketched liberally over the lines of a pencil drawing, Jawlensky went on to dispense with edges entirely. In all the charming “variations” that followed, he let simple blocks of color jostle and overlap like clouds. He never got away from figuration altogether — like an ancient Mediterranean sailor, he hugged the shoreline for fear of the open sea — but he found that repetition created a dependable kind of freedom. In “Variation: Clouds in Reflection,” the evergreen becomes a leaning green missile; in “Variation: Autumn Sound,” it’s a blue megalith hiding behind gray.

Before the war ended, Jawlensky began subjecting the violently expressive heads for which he was best known to the same treatment he’d given his garden view, to dizzying effect. A room full of Jawlensky’s “abstract heads” feels like a hall of hallucinogenic mirrors. Every painting has the same simple composition: a few plain panels of color meeting at a vertical nose above semicircular mouth and chin. But simply by varying those colors — and tinkering, slightly, with the width of the nose or the exact placement of a line — he transforms this opaque icon from a brick-red mirage to a lemon-yellow harlequin, from a trick of light on the wall to a pattern of mud under water.

In 1933, the Nazis banned Jawlensky’s work; the next year, broke and with severe arthritis, he began painting “meditations” organized around an even starker simplification of the human face. This was a black figure something like an orthodox cross into which he could pour his yearning and compulsion directly. In 1937’s “Large Meditation: It Is Still Cold, but Very Soon the Resurrection Will Come,” painted with the brush clutched with both hands, the cross yokes two bloody reds on the right side to two icy blues on the left. Jawlensky died in 1941, at 77, and was buried in the Russian Orthodox cemetery at Wiesbaden, Germany.

A version of this article appears in print on March 10, 2017, on Page C19 of the New York edition with the headline: Abstract Faces at Full Intensity.