The website, Walking Paris with Henry Miller, gives some details about the influence abstract artist Frederick I. Kann (1884-1965) may have had on the American novelist, Henry Miller. Kann was one of Miller’s closest friends and benefactors during his early years in Paris [in the 1930s] and he makes an appearance in Tropic of Cancer as “Kruger.” In his novel, Miller paints Kann as a “spiritual-minded individual” eager for an audience to listen to his obsessive prattling over esoteric subjects. Miller shared several of Kann’s theosophical and astrological interests and, as he was then living hand-to-mouth and often homeless, was willing to exchange an obliging ear for the occasional meal or a place to sleep for the night.In 1941 they met again when Miller was making a tour of America and stopped in Kansas City where Kann was teaching at the Kansas City Art Institute. Kann’s esoteric bent had led him to Freemasonry and he regaled Miller in his customary manner with discussions of Tibet, Madame Blavatsky and Krishnamurti. Miller stayed for a weekend and before he left Kann presented him with a prized copy of The Phoenix by Manly P. Hall.Kann, who was born in Czechoslovakia, had emigrated to Canada in 1910, by 1928 he was living in Paris where he taught and exhibited his paintings. In 1934 he was part of a show that also included works by Delaunay, Kandinsky, Moholy-Nagy, and Mondrian, among many others. He returned to America in 1936 and settled in Los Angeles in 1942. The catalog accompanying a retrospective of his work in 2007, “Frederick Kann: Creative Spirit, Visionary Mind,” notes that “His name appeared alongside some of the most important modern masters of the 20th century, yet the exact character of his work remained unknown until very recently. Kann’s paintings reflect the international impulse toward abstraction during the 1920s and 1930s. His emphasis was not only on the formal elements of color, form, and line, but how they could be used to convey spiritual, mystical, scientific, and cosmological ideas. In 1938 Kann wrote, ‘Nature is not only the sensual perception of distance, but the intelligent penetration of its interior working process.’”

The rest of the account of the interaction between Kann and Miller can be read here. 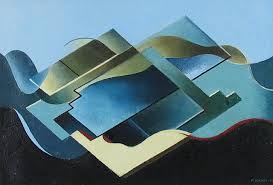 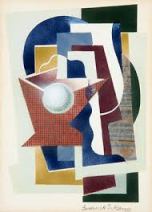