The Story of Count Prozor

On January 1, 1915, the Theosophical Society registered its 57,762-nd. member at the headquarters in Adyar, India. The popularity of the Society had increased immensely. More people joined the society in the 1910s than in the 30-year period 1875-1905. 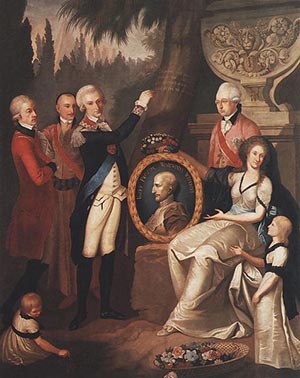 The Prozor family around 1800Here is the story of the Lithuanian Count Maurycy Prozor, who was born on January 28, 1849, in Vilnius, Lithuania, as the son of Edward Prozor and his wife Maria Zaleska. The family was of noble Polish-Lithuanian descent. The grandfather had been a famous general, but in the Polish uprising of 1831 the family lost its Polish properties. Maurycy, Maurice in French, received his education in France, and thus became fluent in the French language. On February 4, 1885, he was married in the Augustiner Kirche in Vienna. His newly wed wife was the widowed Swedish countess Märta Margaretha (commonly known as Marthe-Elsa) Bonde, born on February 22, 1855, at Vibyholm, Sweden. Maurice’s records mention that he acted as the Imperial Russian plenipotentiary, that is, a diplomat with full authorization to represent a government. After the collapse of the Russian Tsarist empire, he functioned as the Lithuanian ambassador in Rome.

It is not so much his professional life that is interesting here, but his relationships and connections in cultural circles, and his command of the Scandinavian languages. Maurice translated all plays by the Norwegian playwright Henrik Ibsen into French, and also the writings of Bjørnsterne Bjornson, Herman Bang, and Leo Tolstoï. Prozor’s translations are still in print. Bjornson was parented to Ibsen on the one hand, on the other hand to one of the most famous German publishers at that time: Albert Langen in München. Maurice also was a very close friend of the poet, writer, and diplomat Oscar Vladislav de Lubicz Milosz, who stemmed from the same nobility as Prozor and who appointed him in Rome as a Lithuanian ambassador. Milosz became a Hermetic philosopher in the tradition of Swedenborg and Louis-Claude de Saint-Martin. No Wiki page on him mentions this side of him, but he has a separate entry in The Dictionary of Gnosis & Western Esotericism.

The Prozor couple had three children: Maurice, Greta, and Elsa. Greta played Hedda in Ibsen’s play Hedda Gabler in 1911, and she frequented the artists’ building Le Bateau-Lavoir and thus was part of the Paris avant-garde art scene. Greta married the Norwegian art dealer Walter Havorsen. He had received painting lessons from the Fauvist painter Henri Matisse, whose paintings he sold. In 1916 Matisse painted a few portraits of Greta; the most famous one is in the Centre Pompidou in Paris. Greta and Matisse were also present at a chaotic lunch on New Year’s Eve 1916, organized by Picasso, Jean Cocteau, and Max Jacob, among others, in honor of Guillaume Apollinaire, who has just recuperated from his war injuries and had published his book Le Poète Assassiné. The list of guests was found recently and auctioned in 2007. Most members of this list have been identified; it is an interesting mix of artists, esotericists, art dealers and patrons, and other people connected to the art world.

Maurice’s wife Märta was an early and ardent Theosophist and appears in the fiction novel Les SeptTêtes du Dragon (1933) by Pierre Mariel, describing the salons she held in Nice, which were frequented by royalty, intelligentsia, and artists alike. Daughters Greta and Elsa became members of the Theosophical Society in Genève and later in Paris. Maurice Sr. joined in Weimar, when he worked at the Russian Embassy there. It was probably Maurice Jr. who joined in 1914, while he was in Munich. This is an interesting fact as such, because he was an absolute exception in the membership list of the Theosophical Society: after Rudolf Steiner founded the Anthroposophische Gesellschaft in 1913, hardly a new member was registered in Germany. 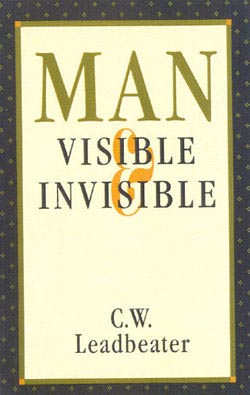 It was Maurice senior who became famous in Theosophical circles and would leave his mark on the arts, although few may have known it. Because Maurice Sr. was the clairvoyant who drew the illustrations for a book by Charles W. Leadbeater, of which the full title is: Man Visible andInvisible.Examples of different types of men as seen by means of trained clairvoyance (1902). Leadbeater acknowledges Maurice’s artistic clairvoyance in his introduction: “The author wishes to express his very hearty acknowledgements to two Theosophical colleagues who have prepared for him the illustrations of this book — to Count Maurice Prozor, who drew and colored them for him from the life, and to Miss Gertrude Spink, who spent many days in patiently copying them with the air-brush. Man Visible and Invisible was the follow-up of another book by Leadbeater in cooperation with Annie Besant, who a few years later became the president of the Theosophical Society: Thought Forms (1901). With those two books we make full circle to the arts. Because those two books have been extremely, if not quintessentially, influential in the development of abstract art.