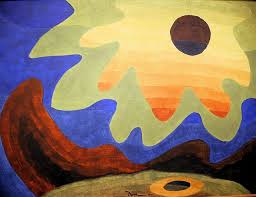 Two slightly later American groups were keenly aware of theosophy, oriental philosophy, occultism and spiritualism. The first, loose grouping of Arthur Dove, Marasden Hartley, Georgia O’Keefe and the photographer Alfred Stieglitz added to this awareness a feeling for the mystical qualities of the American landscape. The second group, based in New Mexico and led by Raymond Johnson and Emil Bisttram, benefitted from a familiarity with theosophy and with Kandinsky’s book. In 1921 they joined the “Cor Ardens” movement of Nicholas ROERICH and in 1938 founded their own Transcendental Painting Group.

ARTHUR DOVE AND THE ABSTRACT QUESTION

“Arthur Dove: A Retrospective Exhibition” at the Phillips Collection promotes the claim, a large one, that the world’s first abstract picture was painted on a chicken farm in Westport, Conn., circa 1910.

Maybe you thought Paris? Many people do, for 1910 in Europe was a year of art world ferment with many fervent theorists, their minds abuzz with synchronist, idealist and theosophical speculations, rushing toward the realms of nonobjective art. Pablo Picasso and Robert Delaunay in Paris, and Wassili Kandinsky, painting mystically in Munich, were all nearing pure abstraction when — according to the catalogue for the present exhibition — Dove emerged from nowhere to beat them to the tape.

“Dove has been credited as the first artist in the 20th century to produce an abstract painting,” wrote Charles S. Moffett, director of the Phillips, and Jock Reynolds, director of Addison Gallery of American Art in Andover, Mass., whose two institutions arranged the exhibition.

Dove’s “Abstraction No. 1” is hanging at the Phillips. Wow, we all are urged to gasp, the world’s first abstract art!

If modernism’s history were the story of a race from depiction to abstraction, which of course it isn’t, Dove’s supposed “breakthrough” would seem to matter deeply. But “Abstraction No. 1” is obviously a landscape (with a tower, sun and trees), and it’s just 8 1/2 inches tall, and by the time you’ve felt the warm pulse of these pictures, Dove’s primacy seems to matter not at all.

Rather think of folk art, and of Yankee self-reliance, and of a seeking soul who cared far less for theories than he did for waves and trees. To hook Dove into narratives of formalist progression, as if he somehow links the paintings of Cezanne to the abstractions of Malevich, is to read him wrongly. He had another sort of mind.

The mildest of country sights nearly overwhelmed him. The beauties of the landscape, of mushrooms and of moons, struck his sympathetic soul as if it were a gong.

The paleness of the newborn moon

Fills me with joy.

Dove’s paintings are not treatises, but intimate, outdoorsy nature poems for the eye.

The man was far too quirky to fit into the mainstream as the formalists perceive it. Still, he did possess a few modernist credentials. Arthur Garfield Dove, who was born in 1880 in Canandaigua, N.Y., and died in 1946 in his small house on Long Island, showed with Alfred Stieglitz, the progressive New York dealer and photographer who introduced Manhattan to Rodin, Matisse, Picasso and Rousseau. Dove also knew such painters as Robert Henri and John Sloan and spent 1908 in France (though he stayed away from Paris), but he should not be mistaken for a man who changed the art world. He preferred to stay away from it. During five years in the 1930s, he went to New York only once.

It was landscape that he served, and the movements of the salt water. Dove all his life craved closeness with growing things, and earth, and the sailings of the moon. In the ’20s, he lived on the Mona, a 42-foot yawl that he Helen “Reds” Torr sailed up and down Long Island Sound. The last house he inhabited, a little wooden one near Huntington, Long Island, was built on pilings like a sort of bridge between the land and sea.

That he made his first abstractions while also raising chickens is not incidental. Dove cared more for birds — and waves and clouds and fields — than he ever did for theorems. Two black birds he encountered in the Bronx Zoo in 1922 filled his soul with wonder. They were, he wrote in awe to Stieglitz, “almost portraits of thoughts.”

Works of nature are abstract.

They do not lean on other things for meaning.

But almost all his paintings do. Dove’s art is referential. What he always chose to paint was what he felt about what he saw.

For most of his career his methodology was constant. First he’d respond deeply to some external presence — to the moon above a silo, say, or an Irving Berlin melody, or a pine tree or a goat — and then he’d find the shapes, the colors and the textures that somehow let his viewers feel what it was he had perceived.

Despite his odd materials (Dove, in his collages, used twigs, bamboo, aluminum, mussel shells and sand) and abstract leanings, which might make him seem a modernist, he remains in many ways a 19th-century man. He was frugal as a pioneer, and just as independent, hardy and ingenious. He liked stretching his own canvases, building his own frames, grinding his own colors. “There is in Dove’s collages,” writes scholar Dorothy R. Johnson, “a puritan prudence of materials.” He liked sailing his own boat and raising his own food. What is also 19th century in his modernist productions is the way they seem to resonate to a kind of blessedness inherent in the land.

His pictures often call to mind those Hudson River painters and artists of the West who detected moral messages in the shapes of rocks and clouds. Dove’s thunderstorms-with-lightning-bolts are nearly as operatic as Thomas Moran’s. His little rolling seascapes — see “Ferry Boat Wreck” (1931) or “Partly Cloudy” (1942) — are about as moody as Albert Pinkham Ryder’s, though always in Dove’s moodiness one feels the background twinkle of his playful wit.

His wit is most apparent in the winking alchemy of his small collages, most of which he made while working on the Mona in his years at sea. These objects have a purpose: They’re meant to call up memories. His “Ten Cent Store” of 1924, for instance, with its artificial flowers, its pipe cleaners and twigs and its card from Woolworth’s, is as sweet and sweetly cheap as a child’s recollection of the corner dime store. His “Rain,” also from 1924 (an object that was bought earlier this year by the National Gallery of Art), uses dripping twigs and rubber-cement raindrops to suggest taking shelter from a summer shower under trees.

In his collages, Dove is far more a folk art tinkerer than a student of Picasso. His famous “Goin’ Fishin’ ” from the Phillips’s own collection uses bark and denim and bending bamboo poles to present a sort of playful meditation on Huckleberry Finn.

The late Duncan Phillips was, after Stieglitz, Dove’s most fervent champion. During the Depression, Phillips kept the artist and his wife out of abject penury by sending him each month a $50 stipend. The gallery he founded now owns 46 works by Dove.

Dove’s assemblages particularly appealed to that passionate collector, another man distrustful of cold intellect in art. Phillips loved Dove’s small collages — for their modest scale, and their gentleness of color, and for the reveries they conjured.

“It was many years ago,” he wrote, that Dove “played with these compositions called collage’ by the sophisticates in Paris. How dated today seem those early cubist stunts by Picasso and Gris. What is it that makes the somewhat similar devices by Dove seem totally different? Wholesome they seem and poetic and redolent of life on the farm or along the shores of the lake.”

Some quality in Dove is entirely American. One feels it in his piety in the face of God’s creations, in his hardiness and quiet and his lifelong independence.

He likely would have winced if he’d heard his champions claim that he’d invented abstract art.

He said, “There is no such thing as abstraction: It is extraction, gravitation toward a certain direction, and minding your own business.”

His touring retrospective, although less than awesome, is endearing. Dove is no mighty master, but he’s impossible to dislike.

“Arthur Dove: A Retrospective Exhibition” is supported by grants from Refco Group Ltd., J. Mark Rudkin, the National Endowment for the Arts, the Glen Eagles Foundation and the John S. and James L. Knight Foundation. The show will travel to the Whitney Museum of American Art in New York, the Addison Gallery in Massachusetts and the Los Angeles County Museum of Art after closing at the Phillips on Jan. 4. CAPTION: Arthur Dove, who sailed Long Island Sound with Helen “Reds” Torr, painted “Sails” in 1911-12. CAPTION: “Nature Symbolized No. 1,” or “Roofs,” above, was from 1910-11. In the ’30s, Dove produced works such as “Flour Mill No. 2,” below, “Fields of Grain as Seen From Train,” bottom, and “Silver Tanks and Moon,” left. CAPTION: Alfred Stieglitz’s portrait of Arthur Dove: “There is no such thing as abstraction: It is extraction, gravitation toward a certain direction, and minding your own business.”