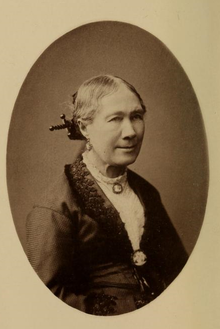 Houghton was born in Las Palmas de Gran Canaria but later moved to London. She began producing ‘spirit’ drawings in 1859 at private séances. She produced her watercolour drawings to the public at an exhibition at the New British Gallery in Bond Street, London in 1871.[2]

Houghton became associated with the fraudulent spirit photographer Frederick Hudson to sell reproductions of his photographs.[3][4]

In 1882, Houghton published Chronicles of the Photographs of Spiritual Beings and Phenomena Invisible to the Material Eye. The book included alleged spirit photographs from Hudson and other photographers featuring mediums such as Agnes Guppy-Volckman, Stainton Moses and spiritualists Alfred Russel Wallace and William Howitt.[5] The photographs in the book were criticized by magic historian Albert A. Hopkins. He noted how the photographs looked dubious and could easily be produced by fraudulent methods.[6]

In April 2015 Monash University Museum of Art staged the exhibition “Believe not every spirit, but try the spirits” that featured 25 of Houghton’s abstract watercolours from the Victorian Spiritualist Union collection. In June 2016 a solo exhibition entitled “Spirit Drawings” was organised by the Courtauld Institute of Art, featuring a number of Houghton’s surviving artworks.[7]

© Collection of The College of Psychic Studies, London.

Georgiana Houghton (1814-1884) developed skills as a medium after attending her first séance in 1859 and achieved her first spirit drawing in 1861. For the next decade, under the guidance of a spirit called Henry Lenny and 70 Archangels, she produced 155 extraordinary water colour drawings.

Georgiana began each piece without preconception of the outcome. She filled each sheet of paper with woven swirls of vibrant colours forming an intricate layering of hues and tints. Amongst her circle of friends and fellow Spiritualists she soon became recognised as a pioneer of spirit art.

To reach a wider audience and hopefully inspire others to become Spiritualists and develop their own gift as spirit artists, Georgiana single-handedly mounted a solo exhibition which took place from May-September in 1871 at the New British Gallery in Old Bond Street, London.

The exhibition attracted many visitors, some of whom were shocked by the previously unseen abstract forms. Although the show was applauded by several traditional artists, it generally received mixed reviews. By the end of the exhibition only one sale had been made, possibly because the work was seen as too modern for the tastes of Victorian England, or perhaps due to the exorbitant prices placed on the pieces by Georgiana. Either way the end result was that the show was a financial disaster for the artist.

Given that Georgiana appears to have anticipated the abstract art of artists such as Kandinsky by half a century it is surprising that she has been largely ignored by art historians for over a century. However this is slowly changing and with the current re-evaluation by scholars and curators it looks likely that she will soon be recognised as not only a pioneer of spirit art, but modern art as well.

This website aims to share information on the life and art of this remarkable woman and artist. Future exhibitions will be announced and over time a catalogue raisonneé of all of her artworks will be compiled. Any information is welcome and can be sent to info@georgianahoughton.com

All images on this site © 2016 The College of Psychic Studies, London, all rights reserved.